With Power BI real-time streaming, you can stream data and update dashboards in real-time. Any visual or dashboard that can be created in Power BI can also be created to display and update real-time data and visuals. The devices and sources of streaming data can be factory sensors, social media sources, service usage metrics, and anything else from which time-sensitive data can be collected or transmitted. 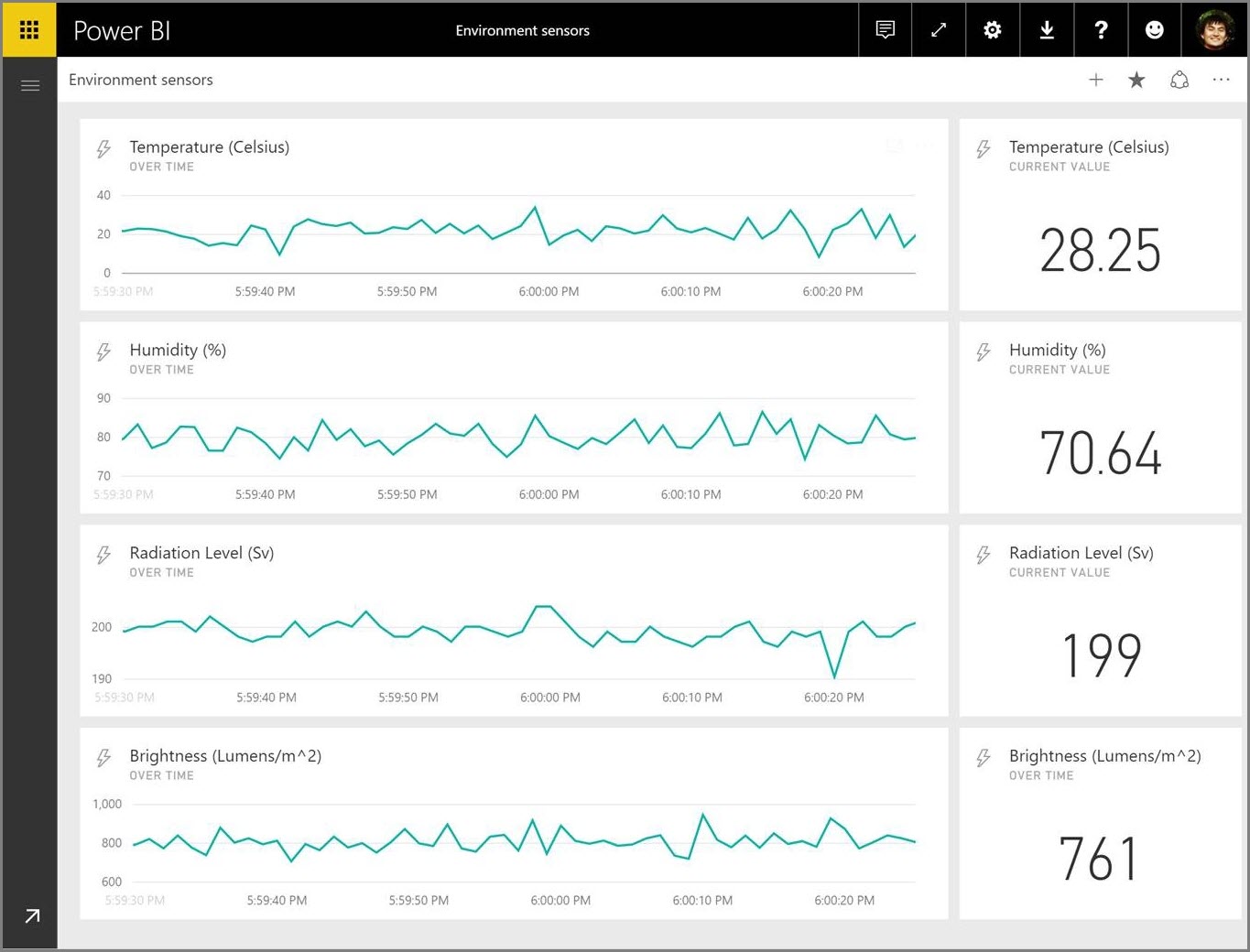 This article shows you how to set up real-time streaming dataset in Power BI. But before we get to that, it’s important to understand the types of real-time datasets that are designed to display in tiles (and dashboards), and how those datasets differ.

There are three types of real-time datasets which are designed for display on real-time dashboards:

First let’s understand how these datasets differ from one another (this section), then we discuss how to push data into those each of these datasets.

With a push dataset, data is pushed into the Power BI service. When the dataset is created, the Power BI service automatically creates a new database in the service to store the data. Since there is an underlying database that continues to store the data as it comes in, reports can be created with the data. These reports and their visuals are just like any other report visuals, which means you can use all of Power BI’s report building features to create visuals, including custom visuals, data alerts, pinned dashboard tiles, and more.

Once a report is creating using the push dataset, any of its visuals can be pinned to a dashboard. On that dashboard, visuals update in real-time whenever the data is updated. Within the service, the dashboard is triggering a tile refresh every time new data is received.

There are two considerations to note about pinned tiles from a push dataset:

With a streaming dataset, data is also pushed into the Power BI service, with an important difference: Power BI only stores the data into a temporary cache, which quickly expires. The temporary cache is only used to display visuals which have some transient sense of history, such as a line chart that has a time window of one hour.

With a streaming dataset, there is no underlying database, so you cannot build report visuals using the data that flows in from the stream. As such, you cannot make use of report functionality such as filtering, custom visuals, and other report functions.

In practice, streaming datasets and their accompanying streaming visuals are best used in situations when it is critical to minimize the latency between when data is pushed and when it is visualized. In addition, it’s best practice to have the data pushed in a format that can be visualized as-is, without any additional aggregations. Examples of data that’s ready as-is include temperatures, and pre-calculated averages.

With a PubNub streaming dataset, the Power BI web client uses the PubNub SDK to read an existing PubNub data stream, and no data is stored by the Power BI service.

Tiles based on a PubNub streaming dataset are optimized for quickly displaying real-time data. Since Power BI is directly connected to the PubNub data stream, there is very little latency between when the data is pushed into the Power BI service and when the visual is updated.

The following table (or matrix, if you like) describes the three types of datasets for real-time streaming, and lists capabilities and limitations of each. 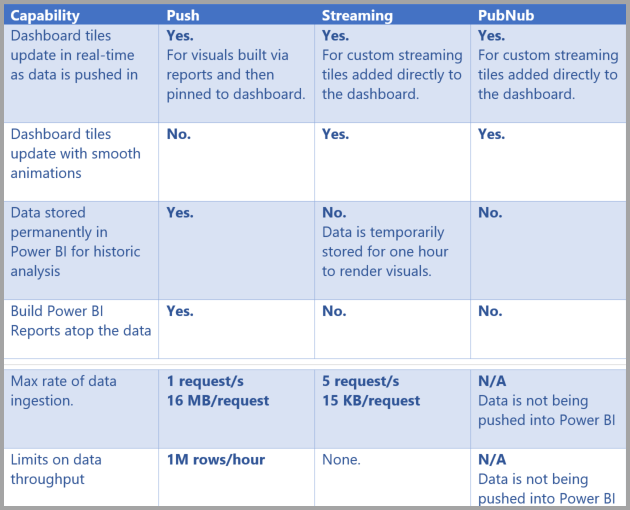 See this article for information on Push limits on how much data can be pushed in.

There are three primary ways you can push data into a dataset:

Let’s take a look at each of those approaches in turn.

If the defaultMode value is set to pushStreaming, the dataset is both a push and streaming dataset, providing the benefits of both dataset types.

Once a dataset is created, use the REST APIs to push data using the PostRows API.

In the Power BI service, you can create a dataset by selecting the API approach as shown in the following image. 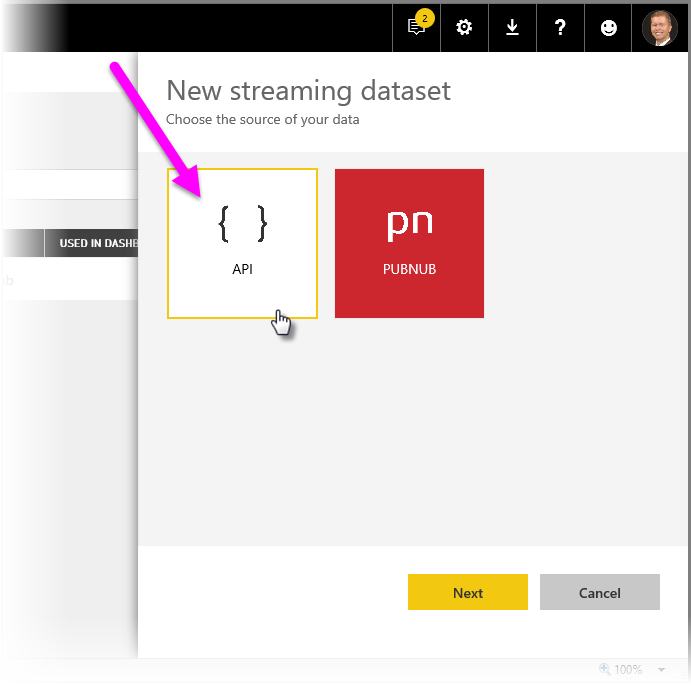 When creating the new streaming dataset, you can select to enable Historic data analysis as shown below, which has a significant impact. 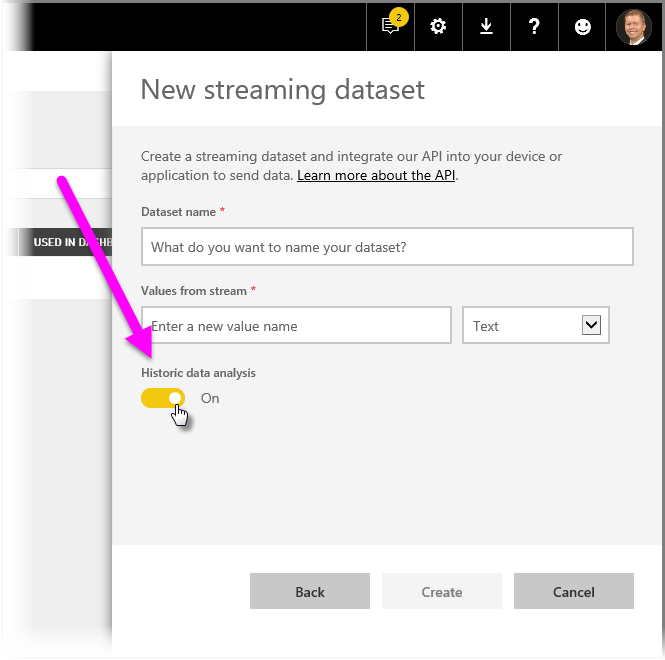 When Historic data analysis is disabled (it is disabled by default), you create a streaming dataset as described earlier in this article. When Historic data analysis is enabled, the dataset created becomes both a streaming dataset and a push dataset. This is equivalent to using the Power BI REST APIs to create a dataset with its defaultMode set to pushStreaming, as described earlier in this article.

You can add Power BI as an output within Azure Stream Analytics (ASA), and then visualize those data streams in the Power BI service in real time. This section describes technical details about how that process occurs.

Azure Stream Analytics uses the Power BI REST APIs to create its output data stream to Power BI, with defaultMode set to pushStreaming (see earlier sections in this article for information on defaultMode), which results in a dataset that can take advantage of both push and streaming. During creation of the dataset, Azure Stream Analytics also sets the *retentionPolicy flag to basicFIFO; with that setting, the database supporting its push dataset stores 200,000 rows, and after that limit is reached, rows are dropped in a first-in first-out (FIFO) fashion.

If your Azure Stream Analytics query results in very rapid output to Power BI (for example, once or twice per second), Azure Stream Analytics will begin batching those outputs into a single request. This may cause the request size to exceed the streaming tile limit. In that case, as mentioned in previous sections, streaming tiles will fail to render. In such cases, the best practice is to slow the rate of data output to Power BI; for example, instead of a maximum value every second, set it to a maximum over 10 seconds.

Set up your real-time streaming dataset in Power BI

To get started with real-time streaming, you need to choose one of the two ways that streaming data can be consumed in Power BI:

With either option, you’ll need to set up Streaming data in Power BI. To do this, in your dashboard (either an existing dashboard, or a new one) select Add a tile and then select Custom streaming data. 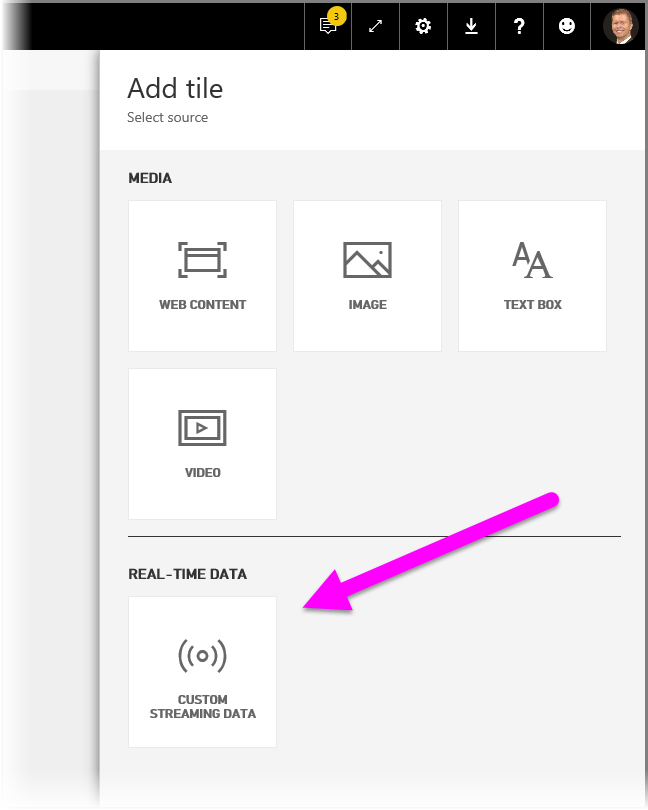 If you don’t have streaming data set up yet, don’t worry – you can select manage data to get started. 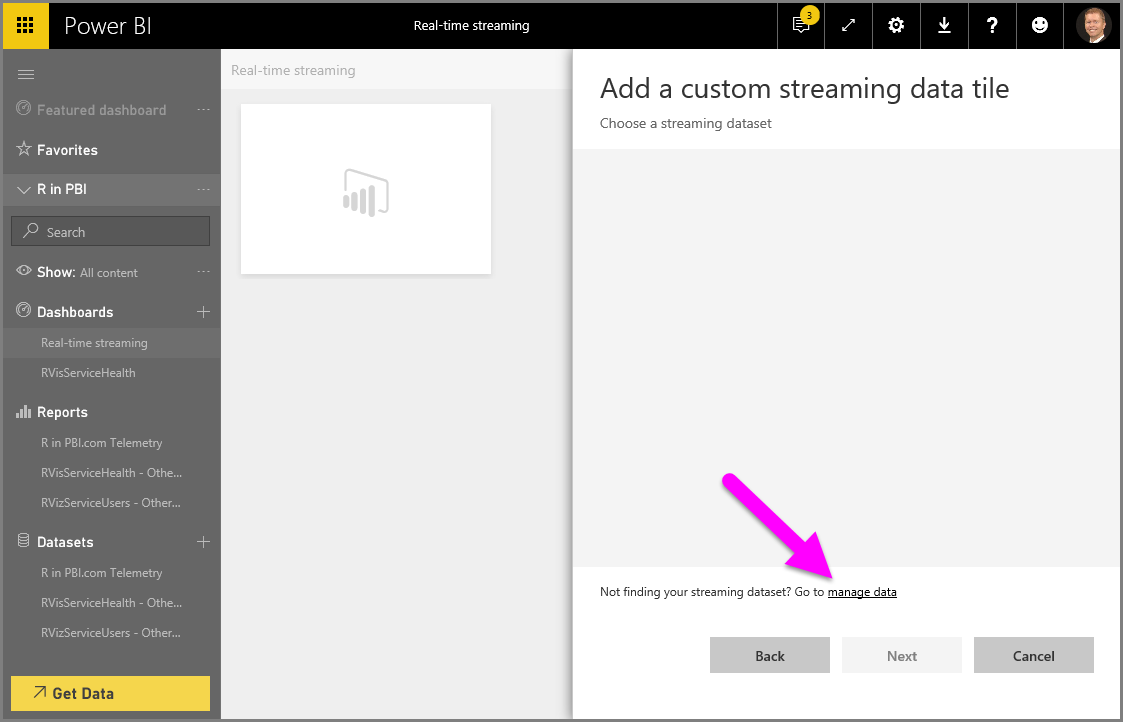 When you click on the + icon, you see two options: 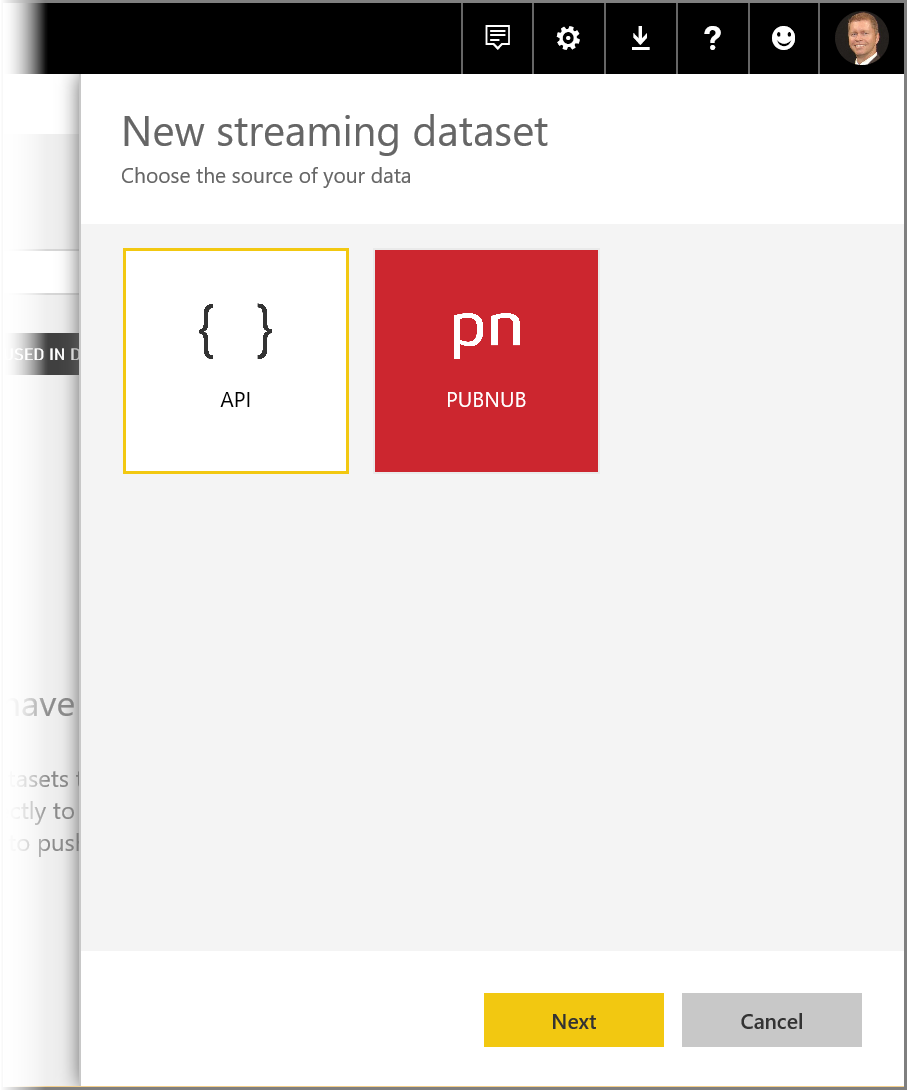 The next section describes these options, and goes into more detail about how to create a streaming tile or how to create a datasetfrom the streaming data source, which you can then use later to build reports.

Create your streaming dataset with the option you like best

There are two ways to create a real-time streaming data feed that can be consumed and visualized by Power BI:

The next sections look at each option in turn.

Power BI REST API – Recent improvements to the Power BI REST API are designed to make real-time streaming easier for developers. When you select API from the New streaming dataset window, you’re presented with entries to provide that enable Power BI to connect to and use your endpoint:

If you want Power BI to store the data that’s sent through this data stream, enable Historic data analysis and you’ll be able to do reporting and analysis on the collected data stream. You can also learn more about the API.

Once you successfully create your data stream, you’re provided with a REST API URL endpoint, which your application can call using POST requests to push your data to Power BI streaming data dataset you created.

When making POST requests, you should ensure the request body matches the sample JSON provided by the Power BI user interface. For example, wrap your JSON objects in an array.

With the integration of PubNub streaming with Power BI, you can use your low-latency PubNub data streams (or create new ones) and use them in Power BI. When you select PubNub and then select Next, you see the following window: 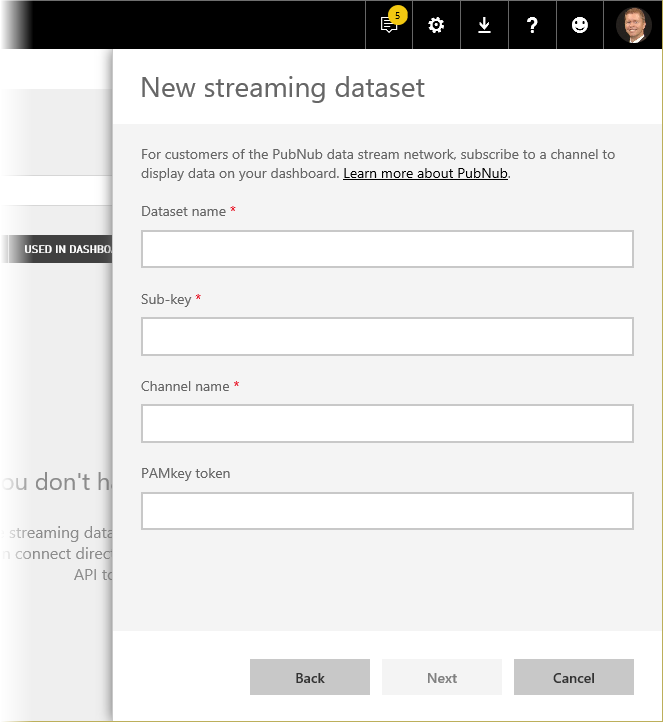 PubNub channels can be secured by using a PubNub Access Manager (PAM) authentication key. This key will be shared with all users who have access to the dashboard. You can learn more about PubNub access control.

PubNub data streams are often high volume, and are not always suitable in their original form for storage and historical analysis. To use Power BI for historical analysis of PubNub data, you’ll have to aggregate the raw PubNub stream and send it to Power BI. One way to do that is with Azure Stream Analytics.

In this sample, we use a publicly available stream from PubNub. Here are the steps:

Give it a try, and play around with the sample dataset. Then go create your own datasets, and stream live data to Power BI.

Here are some common questions about real-time streaming in Power BI, and answers.

Can I use filters on push dataset? How about streaming dataset?

Unfortunately, streaming datasets do not support filtering. For push datasets, you can create a report, filter the report, and then pin the filtered visuals to a dashboard. However, there is no way to change the filter on the visual once it’s on the dashboard.

Separately, you can pin the live report tile to the dashboard, in which case you can change the filters. However, live report tiles will not update in real-time as data is pushed in – you’ll have to manually update the visual by using the refresh dashboard tiles option in the More menu.

When applying filters to push datasets with DateTime fields with millisecond precision, equivalence operators are not supported. However, operators such as greater than (>) or less than (<) do operate properly.

How do I see the latest value on a push dataset? How about streaming dataset?

Streaming datasets are designed for displaying the latest data. You can use the Card streaming visual to easily see latest numeric values. Unfortunately, the card does not support data of type DateTime or Text. For push datasets, assuming you have a timestamp in the schema, you can try creating a report visual with the last N filter.

Can I connect to push or streaming datasets in Power BI Desktop?

Unfortunately, this is not available at this time.

Given the previous question, how can I do any modeling on real-time datasets?

Modeling is not possible on a streaming dataset, since the data is not stored permanently. For a push dataset, you can use the update dataset/table REST APIs to add measures and relationships.

How can I clear all the values on a push dataset? How about streaming dataset?

On a push dataset, you can use the delete rows REST API call. There is currently no way to clear data from a streaming dataset, though the data will clear itself after an hour.

I set up an Azure Stream Analytics output to Power BI, but I don’t see it appearing in Power BI – what’s wrong?

Here’s a checklist you can use to troubleshoot the issue: